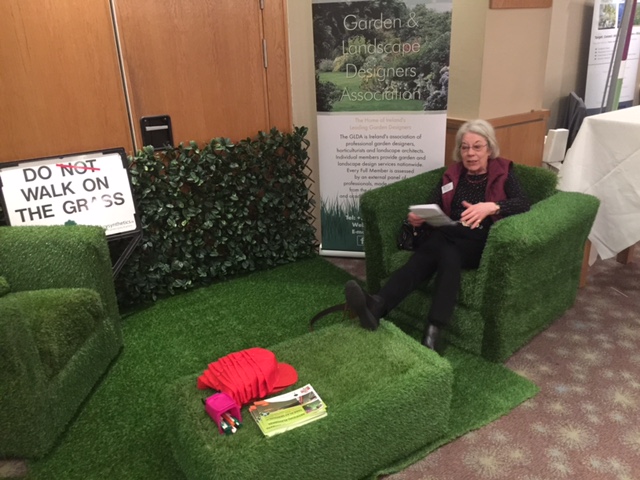 In that spirit I went along last Saturday to the annual GLDA seminar in the Crown Plaza, this time entitled ‘The Designed Garden – completing the picture’, thereby missing the chance, once again, to watch Ireland trounce Italy live. Such are the sacrifices I make in order to bring you a bit of (hopefully) semi-interesting content. There was a lot to the day so this will be a 3 part blog.

But first, god help us all, a word on the leader of the free world DJ Trump. I learned the other day his dad lived to 93. So much for the hope at a quick heart attack! His grandfather apparently * (* saw this online so could be an alternative fact or fake news) made his fortune back during the gold rush. Fair enough you might say, but he made it running a saloon and whorehouse. The clever bit was setting it up in kit format so he could quickly move the whole kit and kaboodle, once a vein ran dry, on to the next boomtown. it was always the dudes who sold the shovels rather than those who did the digging who made out best – could be a lesson for many of us in the landscaping world right there! My friend Flor McCarthy, a Cork solicitor, put it extremely well in reference to Trump’s ‘in the pocket of the russians’ shenanigans – ‘be you so high the law is above you.’

Now all we need is lawyers (a sentence I never thought i’d write) with the balls to step up to defend the rule of law when truth is on the scaffold and wrong is on the throne.

Meanwhile back in the Crown Plaza …

GLDA Chairman Patricia opened up by emphasising how collaboration within our profession is key. I remember how last year she said it’s largely a solitary profession. Both true statements methinks. To complete the picture – to bring a designed garden to fruition. There are many pieces in the Jigsaw.

One such piece, often taken for granted, is the roll of plant hunters, past and present, giving us such a vast array to choose from. The first speaker, Bleddyn Wynn Jones, is just such a chap. A. well spoken Welshman who because he couldn’t make enough money farming between Snowdonia and the Irish sea he branched out into finding hardy new specimens in the forests and mountains of North Vietnam. Hiking around there is not for the faint-hearted and they have had to go well off the beaten track to find new giant magnolias, chestnuts the size of Coi Dret balls and new varieties of witch hazel, of which I’ve always been a personal fan. Between the devastation of agent orange, brought to the area by our American friends and deforestation, (caused by both locals needing fuel and selling off large tracts to the neighbouring Chinese after the war), Bieddyn had to climb high to reach virgin forest. Naturally the government, despite being licenced (a whole other story!), insisted he be accompanied by a national parks guy, even meeting department officials on his expeditions, often walking straight past and ignoring illegal loggers working away undisturbed.

Next Kerrie Gardiner, show manager at Bloom, main seminar sponsors (Sanctuary synthetics were also supporters!), explored the differences between regular and show gardens… She had surveyed several previous gold medal winners (which explains why she hadn’t called me!) as to why they did it. I loved the gravitas at her concluding quote from Willy wonka ‘come with me and you’ll be in a world of pure imagination’.

Then came Thomas, a greek academic and landscape architect, who I expected to be boring but wasn’t. Tune in again soon for more.