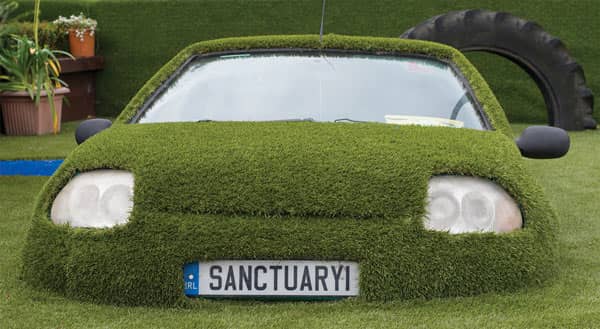 Hello again. Jeez, back so soon after being so quiet for so long. You’d swear he had a book to sell or something.

Funny you should think that.

Unless Putin pushes that big red button in his Kremlin office the ‘Big Hairy Green Book’ should be out later next week.

Below is some of the stuff edited out as at 130,000 words initially it was deemed by my editors to be a tad too long for some reason.

Here’s a sorry story about ‘Patriona’ mark II and an eight mile tailback.

Before the Green Machine, I christened my first ever work van ‘Patriona’. My wife always suspected it was called after a ex-girlfriend. Not true. I just thought the German name suited my lovely secondhand beige 1.8 litre VolksWagon with drop sides and toolbox compartments under the floor, a pickup version of the Mystery Machine from Scooby-Doo. Striking out into the world of self employment, master of my own destiny, I was like a dog with two tails. I possibly worked Patriona too hard and all too soon had to replace her with Patriona mark II. This investment was a newer bigger crew cab version of the same VW, difficult to find on the second hand market. They were so reliable their owners tended to keep them for ever. It was ideal for our work at the time, a mixture of landscaping, maintenance and steadily building up the synthetic grass side of the business.

The villain of the story, I’ll call him “July” to grudgingly protect his identity, had been with us a year or so. He never had more than a couple of words of English to rub together. Still he was reliable and could be trusted to get on with things.

After all every business needs indians as well as chiefs. I had just put our logo on Patriona II but, mercifully, hadn’t gotten around to covering it in grass yet. Then
came the dreaded phone call.

Ring, ring.
‘Mark, small problem’
It was a beautiful sunny afternoon in July as it happened.
‘You come. Quick, quick’

Here we go, what now.

He handed me over to a traffic cop. ‘Are you the owner of this vehicle and trailer?’ Oh shit. It was overturned and blocking the entire northbound stretch of the busy M50 at exit 13. It would be number 13. I dropped everything and floored it up to the Dublin motorway with an ever increasing feeling of dread. Listening to traffic reports of a huge tailback didn’t help. Sure enough, despite it being rush hour, there was zero traffic coming towards me as I hurried south. I soon saw why.

Coming up the off ramp on exit 13 I could see the van on its side with the upsidedown trailer, still attached, contents strewn across all three lanes. The most shocking part was not the tailback as far as the eye could see. Rather it was the appalling vista of ‘July’ standing smiling and posing on top of the wrecked van while his helper, a student on work experience, snapped photos of his handiwork. I’d include a photo of it here but if I’d gotten my hands on his phone at the time I’d have shoved it where the sun doesn’t shine. Judging by their demeanour I think the cops shared my sentiment. By the grace of God no one was hurt.

It transpired that ‘July’, the absolute muppet, had loaded a tonne or so of top soil at the very back of the trailer then, no doubt speeding, managed to somehow lose control on a long straight flat section of motorway, see-sawing, breaking and eventually rolling the lot. No other vehicles or people were effected other than being late for tea, missing their flights or having to pee into bottles. My own sister was among the many inconvenienced by his incompetence. As the wreckage was cleared I stood sheepishly suffering more than a few dirty looks.

There was no happy ending. Yes the insurance paid for most of it but I was never be able to replace that written off unique VW. I did however quickly replace Mr ‘July’. My sister Jen still gives me abuse over the holdup that day.